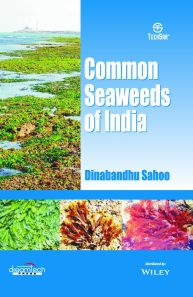 India has a coastline of more than 7000 km and an Exclusive Economic Zone (EEZ) over 2 million km2. A total of 770 species of seaweeds have been reported from different parts of the Indian coasts which includes 184 species of green, 166 species of brown and 420 species of red (Sahoo et al., 2001). Unlike the oriental countries like Japan, China, Korea, etc. India does not have a long history about the uses of seaweeds as food and various other purposes. However, in recent years a lot of interests have been generated by the industries, academia and researchers in the field of seaweeds research and utilization. One of the most difficult job in this area is the identification of various species. This book deals with identification of some of the common seaweeds of Indian coast.

Dr. Dinabandhu Sahoo was the first Indian student to visit Antarctica during 1987-88 in the 7th Indian Scientific Expedition to Antarctica. He undertook two trips to Arctic during 1991 and 1992. He was a visiting fellow at Smithsonian Institution, Washington DC, USA in 1992, INSA visiting fellow at Kochi University, Japan 1999-2000 and visiting fellow at Stamford University, USA 2002. He has visited all the seven continents and five oceans within a record time of 18 months during 1988-89. He had his training in Seaweed Cultivation and Utilisation at Philippines and Japan and visited Australia, USA, Spain, Canada, France, England, Switzerland, Peru, Portugal, Thailand, Sri Lanka, Germany, Austria, Italy, Mauritius, China, the Netherland, Hong Kong, Singapore, Bangladesh, Malaysia, Greece, Turkey, UAE, Norway, Sweden, Finland, Denmark, South Africa, South Korea, Taiwan and many other countries.