Gene and Its Engineering 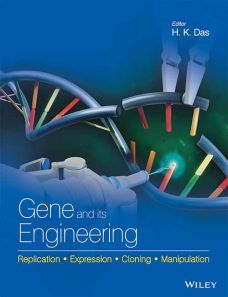 The book covers molecular biology of the gene and genetic engineering. It is an endeavour to expose students to the actual experiments that have revealed the science of gene and the development of its engineering. The book provides comprehensive details and chronological evolution of the structure of gene, its replication and expression, and genetic engineering based on significant discoveries made by the scientists. It is a comprehensive source of information to both students and instructors.

Part I. Gene, its replication and its expression

1 Concept of a gene

2 DNA as the genetic material

6 Chromatin and its structure

11 RNA, its transcription and processing

12 How transcription of genes is switched on and off

13 Structure and replication of RNA

14 Translation of mRNA into protein: Classic and recent experiments

17 Cloning of gene: How it all began

24 Streptomyces as host for recombinant DNA

28 Plants as host for recombinant DNA

29 Chemical and enzymatic characterization of a cloned DNA fragment

31 Nucleic acid amplification and its applications

35 Techniques for the study of regulation of a cloned gene